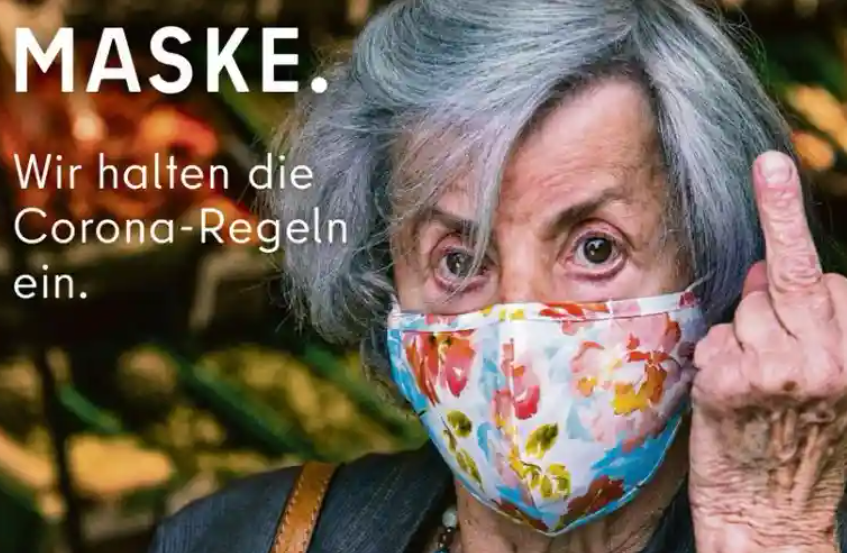 A recent advert showing an old woman sticking up her middle finger has been removed by Berlin’s tourism board.

Part of a wider campaign to alert tourists and locals to the new coronavirus rules across the city, the ad pictured the woman wearing a face covering, alongside the caption: “The raised index finger for all those without a mask.”

Underneath it read: “We obey the corona rules.”

Visit Berlin designed the advert for its “Berlin Gegen Corona” (“Berlin Against Corona”) campaign, which aims to encourage mask wearing and adherence to rules around capacity, social distancing and opening hours at bars and restaurants.

“Berlin’s range of interesting restaurants, bars and pubs is legendary. We want to keep that together,” said Burkhard Kieker, the managing director of Visit Berlin, when the campaign launched in September.

“The raised index finger is not well received in Berlin. That’s why we want to pick up the Berliners with their own dry sense of humour.”

Christian Tänzler, spokesman for Visit Berlin, added that the design was aimed at those endangering the most vulnerable citizens by refusing to wear a mask.

“Most Berliners and our guests respect and follow the corona rules but some people don’t,” he told the BBC. “These people risk the lives of older people and people from the at-risk community.

“We wanted to give attention to this problem. For this reason we have chosen this provocative motif.”

However, the advert ruffled feathers in several quarters.

Lorenz Maroldt, the editor-in-chief of Berlin’s Der Tagesspiegel newspaper, said it was “insulting”, while the mayor of Berlin, Michael Müller, called it “embarrassing”.

Mr Tänzler apologised if the advert had caused offence.

“If some people feel personally attacked because they are not able to wear a mask, that was not our aim. I apologise for that,” he said.

Marcel Luthe, a member of the Berlin senate, put in a formal complaint to the police about the ad, claiming it incited hatred against people who are unable to wear a mask for medical reasons.

The ad has since been pulled from the campaign, reports Reuters.

However, the rest of the adverts, which have not proved controversial, will continue to run on billboards and at bus stops at popular tourist spots until the end of March.

Jimmy Kimmel Guesses ‘Who’s High?’ And His ‘Weedar’ Is Dead-On.

Couple ‘spied on’ during sex in hotel